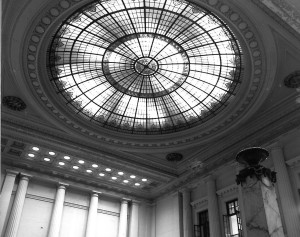 The magnificent glass dome that caps the banking hall.

Built from 1910 to 1912, the Millennium Centre is the former Canadian Imperial Bank of Commerce building. Located at 389 Main Street in Winnipeg, Manitoba, it is at the heart of the nationally recognized historic site known as the Exchange District. Once one of several banks along what was known as “Banker’s Row”, this particular building was the regional head office for the CIBC, and was thus opulently designed to impress and even intimidate customers.

An office on the third floor of the building, the majority of which is still intact and awaiting restoration.

Reminiscent of the neo-classical style of construction, the first floor of the building features a gorgeous marble banking hall, capped by a magnificent glass dome. Currently only the first floor is usable, but we hope to continue to redevelop the building and make it a sustainable, integral part of Winnipeg’s Exchange District.

Both the banking hall, now known as Celebration Hall, in addition to the Tapestry Room, the lavishly decorated former bank manager’s office, are available for event rental. We have hosted everything from weddings and concerts to production filming and board meetings. 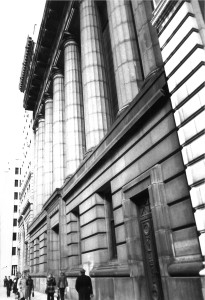 An archival exterior shot of the building.

The Millennium Centre represents a very important development in the heritage community of Winnipeg. At a time when heritage buildings were not valued as they are today, the building was threatened by demolition to make way for an employee parking lot. Thankfully, the citizens of Winnipeg had had enough and the public protest not only resulted in the rescue of the building, but also in the creation of Heritage Winnipeg, an advocacy group within the city that helps to save threatened buildings as well as ensure their sustainability in the future.

More information about the Millennium centre

The Making of a Memorable Millennium: The Canadian Bank of Commerce
From the Official Blog of Heritage Winnipeg

389 Main Street: The Canadian Bank of Commerce
From the City of Winnipeg Historical Buildings Committee